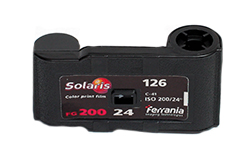 The order form has all the details and services along with a Freepost label.

Old films deteriorate with age and if badly stored. If the film is a total failure you will still be charged.

We have been processing film since the 1970’s.